When Nothing Remains – In Memoriam (Solitude Productions) 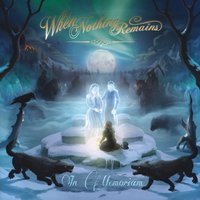 Sometimes it boggles the mind who some bands stay below the radar for so long, despite continued excellence. Take a look at When Nothing Remains, a death doom band that has been doing their thing for three albums at this point. Not much on the pre-release hype train, but then again, who needs hype when you can pull off this genre of music with this much finesse?

The doom/death approach of When Nothing Remains is mostly tried and true (in the realms of say, Draconian, Novembers Doom, or Swallow the Sun), but the level of songwriting is what makes the difference here. Lumbering and melancholic riffs really tug at the listener, offering plenty in the way of sadness and sorrow. But there’s something so elegant about the melodies that are interlocked into each track, and the background work that makes them so highly emotive. Using keyboards (and strings in particular) to elevate the mood, tracks like “Ghost Story” carry the downtrodden weight that the genre is known for, but also a certain degree of epic majesty. The atmosphere that is conveyed from beginning to end never moves from being compelling. In terms of highlights, “The Soil in My Hand” switching things up with female clean vocals and softer tones and serves as a nice centerpiece, and the opening track “Reunited in the Grave” nicely opens things up with 10-minutes of doom/death magic, effectively showcasing everything to come: sullen atmosphere, great growl/clean dynamics, and crawling riffs atop serene melodies. The cover art (and it’s relation to the previous two album covers) is worth noting as well, which is rather unique and quite fitting to the music within.

Maybe third time is the charm for When Nothing Remains, who have built up an excellent discography. Sure to be a sleeper hit this year, In Memoriam is a damn-near must have if you enjoy doom/death in its purest form.