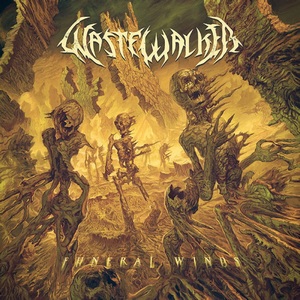 Fans of The Black Dahlia Murder and Alterbeast take note – rising new act Wastewalker has arrived with plenty of appeal for you. With John Abernathy (ex-Conducting from the Grave) on guitar and Cam Rogers on vocals (Alterbeast), you know there’s a solid base from which to build the music upon. Funeral Winds sticks to familiar ground if you know either of those guys, but it’s quite an enjoyable ride.

If the opening paragraph didn’t give it away completely, Wastewalker play technically-driven melodic death metal. Things begin with their most melodic as “Hazmat Birth” begins to pound through the speakers, with more than a fair share of striking melodies and leads as they bounce off the more technical moments. Some monstrous grooves also help to keep things varied along the way, as “War Never Changes” and the title track effectively point out. The technical aspects never fail to hit their mark, often coated with a melodic touch within that framework that make them stand out even more. Intricate melodies mark most of the album, but “Apathy for Those Drowning” and “Fleshwounds” come out as the highlights with their combination of frantic speed and sheer memorability. To that end, the leadwork is nothing short of impressive either, with dizzying showcases (see “The Consumption”) frequently giving the listener pause. No need to bog things down with “atmosphere” either – proof that solid writing is all it takes to keep the listener’s attention.

Wastewalker aren’t about reinventing the wheel with Funeral Winds, but they are about showing how heavy and technical riffing can keep a certain melodic streak without compromising brutality. In a genre sometimes impeded by showmanship more than songwriting, Funeral Winds truly gives out the best of both worlds – plenty of technical wow factor but they put it into actual songs that hold up long after your initial “whoa, that sounds cool” wears off. Worth seeking out for those into the modern death metal scene.