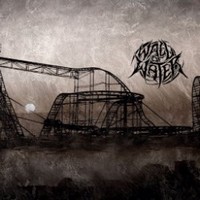 Black metal has evolved dramatically since its creation decades ago. It has spawned various takes on the original style which have crafted some genuinely polarizing bands over the years. Some artists prefer to take the standard tried and true corpse paint and blasphemy approach, while others have gone into territories of the avante garde or just flat out strange. This ever evolving music genre has certainly raised some interesting artists, particularly in the United States, over the last few years.

Wall of Water is the creation of multi-instrumentalist/vocalist Cullen Toner (formerly of New Jersey black metal band Abazagorath) and drummer Shawn Eldridge (Disma). Much like the image their moniker conjures, Wall of Water have a sound that is crushing, oppressive and difficult at times to grasp. Their 2016 release begins with the track “Untitled” which immediately treads into 90’s death metal staccato riffing with scorching black metal rasps over top. Toner’s vocals fluctuate with a variety of vocal shouts, operatic death throes, manic screams and the usual grim blasphemous style we all know of the style by now.

This is probably the most straight forward track on the release. From here Wall of Water venture down paths of extreme psychedelic noise (“No Moment of Clarity”), brutal power noise (the end of “Clairvoyance”) and droning ambient textures (last track “Astral Hauntings”). These are all elements explored before by various artists across the extreme metal spectrum, but Wall of Water have a knack for blending these styles seamlessly into one giant pissed off beast that is compelling as it is abrasive. I found myself at times in anticipation as to the journey each track would take and was never disappointed. If this is the beginning of the journey for Wall of Water, I’ll be keeping my eyes (and ears) out in anticipation for where Cullen takes this project next.

Wall of Water on Bandcamp