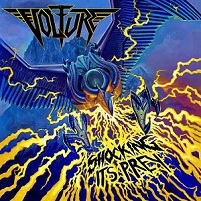 A record that’s totally indicative of the retro metal boom that still has legs, Shocking Its Prey, the debut album from Richmond’s Volture is as expected, a freewheeling, substance-less good time. At six songs, the band juggles NWOBHM, thrash, and power metal, all held up by singer Brent Hubbard’s helium-induced vocals. The dude seriously had to have inhaled something prior to cutting his tracks – his highs can probably break glass.

With Municipal Waste guitarist Ryan Waste in the ranks, there’s naturally going to be some degree of thrash-a-tude, and Shocking has it in spades on opener “Volture.” The band draws a direct line to labelmates Enforcer, although the Swedes have a bit more swagger to them, but the similarities are there, from the gallops during “Heavy Metal Machine,” to the Killers-era Maiden affinity going on for “Night Walker.”

It’s easy to gauge a band’s lyrical bent went they name a song after themselves, so “Volture” invariably set the stage for the rest of the album, with similarly-themed songs like “Heavy Metal Machine” and the raunchy “Cheap Thrillz” being the real lyrical standouts. But Hubbard is a beast on the vocals, capable of hitting the highs of a King Diamond, along with the pitch of a very early Geoff Tate. Who knew people like this still existed…and are able to be convincing without getting all hokey on everyone.

A quality addition to the swelling traditional/retro metal field, Volture certainly have this sound down pat. Then again, it’s not like aping 80’s metal is equivalent to splitting hairs. Shocking Its Prey may be devoid of anything remotely serious, but helium-primed and earth-shattering vocals aren’t anything to be taken lightly.