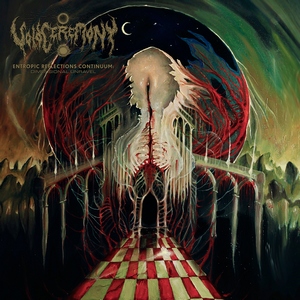 After three previous EPs over the past decade, California’s VoidCeremony have entered their own cosmic realm of death with their first full-length effort, Entropic Reflections Continuum: Dimensional Unravel. A mouthful for sure, and the music that resonates behind it is no less complicated. Regardless, VoidCeremony leave a strong impression with this full-length debut.

Somewhere in the cosmos at the intersection of the skrony, cavernous, and progressive landscapes, VoidCeremony have found their home. The waters are very murky in tone, as the first slowdown in “Desiccated Whispers” bombards you with overflowingly chunky riffs that practically ooze heaviness. It’s a bang-up first impression, as the grimy riffs are paired up with a very noticeable and playful bass and really clamor for your attention in the best way. The sprawling, almost 9-minute follow-up in “Sacrosanct Delusions” introduces more progressive melodies (think more Atheist than more modern prog death) into the band’s repertoire and makes the track a real standout in the album. The earworming melodies are a nice contrast to the bubbling ooze of the riffs and basswork. Other tracks give off some otherworldly vibes with the instrumentation, such as “Binded to Unusual Existence,” which abandons the vocals as well in favor of this progressive and spirited atmosphere that brings you on a trip into a new dimension. The merger of the murky and progressive give the band an interesting texture, and it’s easy to lose yourself in listening to the various elements, as well as returning to the album to dig into some different ones the next time.

Entropic Reflections Continuum should be an easy sell for those who like dark and progressive death metal. It doesn’t concern itself with trying to cater to a particular flavor and instead just delivers all of the goods in a way that will be satisfying for progressive fans as well as those looking for an escape into some cosmic horror.