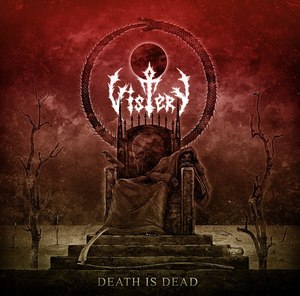 Well-done and impactful death metal is always something that will get you to call attention to the world around you. It’s a wake-up call that energizes and gets you out of whatever funk is going on in life. Vistery’s third release, Death is Dead showcases the same straight go-getter attitude that keeps the genre running like a well-oiled machine, and well…death metal just doesn’t die.

There’s nothing in Vistery’s arsenal that you haven’t been finely attuned to if you check out this sort of thing with even infrequent exposure. This is battering ram type stuff – go for the gusto death metal that bands in the ‘90s really latched onto. But for what it’s worth, Vistery does help to sell the album with some added groove and melodic tendencies. The bounciness of a track like “Rotting Earth” makes it hard not to bob along with the riffing, and the way that it satisfies on both a brutal and catchy level is what makes all the difference. At times there’s a bit of Obituary-esque thundering to the riffs, other times it gets faster (parts of “Omniphobic”), but there’s always something for the listener to enjoy. One piece in particular was the basswork, such as on “Swamp,” where it’s really given some more breathing room akin to modern tech death standards. Combine that with the need for groove and there’s a lot of heaviness that doesn’t become an incoherent mess. Lastly, helping out is the straight-forward nature of the tracks, mostly sticking to around 3-minutes. Long enough to get the point across but never excessive in nature.

Death is Dead is a solid piece of death metal. It may not be particularly innovative in the delivery, but between the straight-ahead brutality and grooves, and subtle melodies and bass tones, there’s plenty to sink into for those in need of a quick, retro-inspired death metal fix.