Virulent Depravity – Fruit of the Poisoned Tree (The Artisan Era) 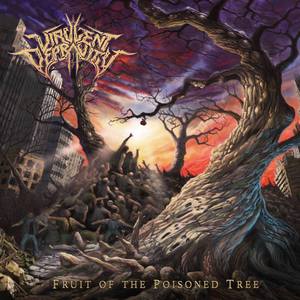 As much as this scribe enjoys a solid tech-death pummeling, much of what’s been coming through the gates lately hasn’t stood up as well. Not quite a slump per say, but it just seems like much is ‘going through the motions’ so to speak. But all it takes is one great album to re-ignite the spark, and that album is certainly Virulent Depravity’s debut, Fruit of the Poisoned Tree.

Much of the album is tackled by Colin Butler (vocals, guitar, bass), with Malcolm Pugh (Inferi, A Loathing Requiem) and Kevin Paradis (Svart Crown) adding additional guitar and session drums, respectively. Worth mentioning, not only because of the pedigree it grants the album, but because Fruit has some incredibly complex and delicious technical flavor. Hit play to the opener “Serpentine Messiah” and it won’t take long before your brain starts to scramble a bit from the insidious weaving of top-shelf technicality. The kind of thing that gives the listener a real adrenaline rush from all the moving parts – moving at sometimes absurd speeds of course (see “Beyond the Point of No Return”). It’s hard not to invoke a tech-death grin as the cuts ramp up to top speed and simply dazzle with intricate, yet memorable, musicianship – check out the title track and “Your Demise” to witness the merger of downright frantic speed with an oddly melodic twist. Melody further infiltrates the sound when they ease off the gas a bit, as “Desecrating Eden” and the lengthier “Only Human” exemplify. A few tracks offer a more atmospheric feeling at times, but thankfully the band veers far from going into the “Fallujah” zone (that many have decided to exploit) and these segments hold some lasting power, such as “Crushed by Futuristic Filth,” because they are a shift from the otherwise frantic nature of the album.

Obviously there’s much to enjoy if you prefer your technical material to branch towards the Spawn of Possession and Archspire all-out assault. The ability to focus and dissect the intricacies will keep die-hards coming back for more, while some of the melodic aspects keep it from becoming too daunting. Easily the tech album to beat so far this year.