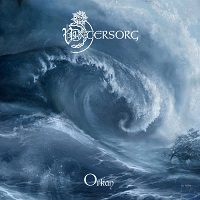 A hurricane indeed. Relatively hot on the heels of last year’s solidJordpuls, this summer finds the Swedish folk/Viking/progressive/black/whatever metal duo returning with a new set of melodic rollercoasters that make up the eight tracks and 50 minute running time of Orkan (Hurricane). There is something to be said for producing quality albums consistently (and frequently) and that is certainly the case with the Swedes and their lavish mythological tales here!

Folk metal as a term (at least to these ears) often conjures rather hokey images and sounds, though admittedly that is to be blamed on a lack of familiarity with the genre moreso than any shortcomings of the genre itself. Albums like this however are a showpiece why legitimate folk instrument implementation (…f*ckin’ flutes!) across tracks like “Polarnatten” (Polar Night) are used to fantastic effect. The terms folk and symphonic seem often used interchangeably in their actual implementation, especially true here. Flutes are joined by horns, harpsichords, and all manner of other sounds that ebb and flow from center stage to background filler and back again, almost always within the course of a song – album opener “Istid” (Ice Age), is a fantastic illustration of this.

Every song on the album readily transitions from sweeping and glorious symphonic highs to blistering black metal blasting lows and everything melodic and soft in between, usually multiple times depending on if it involves a chorus. Different tracks do highlight different aspects of the band’s sound as a point of focus, with songs like “Myren” (the Mire) and the aforementioned “Istid” featuring an almost exclusive focus on melody and making extensive use of Vintersorg’s clean vocals. Though his black rasp is used consistently throughout as well it is his use of soaring and often layered cleans

that really steal the show, popping up in different forms across every song and never failing to impress.

The guitar sound is balanced, but in foreground at all times while avoiding being a thin-sounding nuisance that black metal guitar often winds up being. The bass is absurdly playful, often doing its own thing but keeping harmony with the rest of the song. The drums are, though programmed, are very punchy and tasteful, using the standard array of blasting, double bass streams, and even simple backbeats appropriate to wherever in a song they happen to fall. Instrumentally there’s little to find fault with.

It isn’t difficult to imagine that on some level, this band exists as a creative outlet for Vintersorg to bring to life any number of stories told to him as a child. All kinds of moods and sounds are showcased over the course of the album and much of it conjures the usual Viking saga related imagery. Enormously vast vistas in “Ur Stjärstoft är Komna” (Of Stardust We Are Born), vicious battles with fantastic decapitations in “Norrskenssyner” (Northern Light Visions), and even an unexpected but supple love scene, showcased with the surprising use of auto-tuned vocal harmonizing in “Havets Når” (Mercy of the Ocean).

There is some understandable thematic overlap with Borknagar’s recent Urd and taken together both albums are somewhat complementary of one another. The late Windir and even Dimmu Borgir’s 1994 release For All Tid came to mind while listening to this. For those well-versed in the ways of Vintersorg you will likely be neither surprised nor disappointed by what the band has on display here. Likewise for the uninitiated you could find a better place to start. There is a lot to love here and uncovering its many layers will take a long time.