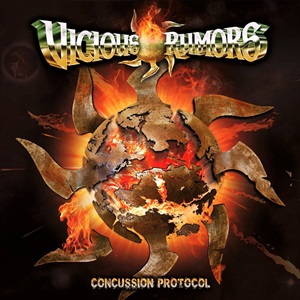 A Bay Area staple, Vicious Rumors have been plugging along since 1979 – steadfast in their American power metal ways regardless of what’s hip or in these days in the scene. Concussion Protocol is the twelfth studio album for the five-piece, founding guitarist Geoff Thorpe steering the ship along with long-time drummer Larry Howe by his side. Those expecting the twin rhythms and versatility from up tempo crushers to mid-tempo anthems will find these eleven cuts delightful, as these veterans understand what they do best and pump out material that doesn’t rock the creative boat for their ardent followers.

An interesting aspect to this record is the exemplary use of fluid bass parts that add beyond normal root note backing in the band’s performances – as Tilen Hudrap can engage in a Geddy Lee/Steve Harris manner against the ubiquitous double kicks for “Chemical Slaves”. Of course many want fast and furious guitar work with fiery lead breaks popping in and out of the high octane foundation – and that’s what Geoff along with fellow lead axe masters Thaen Rasmussen, Steve Smyth, and Brad Gillis deliver during “Chasing the Priest” and “1000 Years” that has been a staple since the early Soldiers of the Night/Digital Dictator period. Diversity being key to keeping interest, the band understand the need for darker or emotionally ballad-esque numbers here and there – where latest singer Nick Holleman shines as “Circle of Secrets” allows him to color the verses and chorus from a multi-octave low to falsetto-oriented delivery with confidence and adept power. There’s a reason why the man was chosen for this job – and will gain a lot of respect for his Carl Albert-esque propensities.

The nursery-rhyme chorus schemes can be easy on the ears to work in certain situations (“Take It or Leave It”) while slightly annoying in others (“Victims of a Digital World”) – but overall Concussion Protocol captures Vicious Rumors as pioneers willing to hoist the power metal flag to the bitter end. If Nick can keep those pipes in prime order, the current gains made on the road should continue onward and upward – as well as rattle a few brains and bodies in the process.