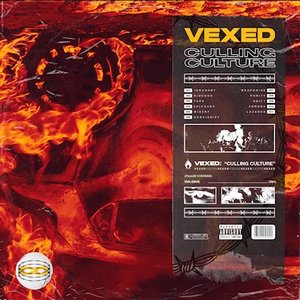 Intriguing to think sometimes about how the modern progressive scene can branch into so many different directions and categories. Vexed is an act that can easily be lumped in as a modern act with some very progressive tendencies, but that’s not the only trait that defines them. Their first full-length, Culling Culture, introduces them as a groovy heavyweight that can levy large scale musical destruction while still keeping in touch with a more melodic side when needed.

While some may toss some quick comparisons to Jinjer, Vexed is a different beast in and of itself. Sure, there’s both atmospheric beauty and strikingly bone-crushing grooves, but that’s about where the connections end. There’s a much more ‘street level’ and abrasive vibe to that of Vexed, and it’s something that allows them to stand apart from other groove-heavy acts of the moment. There’s this immediate, gut-punch mentality to the riffing of a song like “Fake,” (not to mention the bruising breakdown the song ends on) and the rapid-fire snarls of vocalist Megan Targett are vicious attacks, even bringing an almost deathcore level of extremity to them when she digs lower into her range. In the same track, you can find some eerie melodies and lead work that give the track an even darker and more menacing feeling. That said, they can turn around with the next track and deliver a more floaty melody to start off “Epiphany,” embracing some clean vocals, electronics, and more upbeat-sounding riffs without it sounding like an entirely different act – as well as being able to flip the switch onto heavier elements without it feeling disjointed. It’s this range that keeps Culling Culture a throttling album that will hold your attention for many repeat listens.

Massive grooves that hit like waves, urgent and intricate riffs, visceral roars, as well as an occasional dip into more atmospheric and melodic waters gives Vexed a large sandbox to play in. For their first full-length, they’ve wrapped these elements into a readily digestible and venom-spewing offering that sprinkles in some melodies and impressive solos and leads as icing to the cake. Culling Culture is immediate and captivating, and shines the light on Vexed as a big player in the years to come in the modern metal scene.

Vexed – Anger as a Tool to Bring Happiness