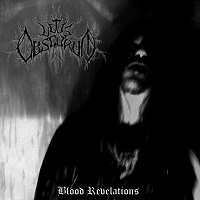 USBM of the Northwestern variety, meaning it’s not Wolves of the Throne Room, but yeah, there’s some parallels. Essentially the project of one Numinas (who also does time as drummer in American death metallers Drawn and Quartered), Vetus Obscurum holds up its end of the necro black metal bargain, boasting a morose and melancholic atmosphere that is difficult to look past over the course of this 4-song effort. In fact, had this thing been longer than four songs, our rating would be kicked up a peg or two.

Drawing from the atypical BM elements (old Darkthrone, old Satyricon, old…everyone), Vetus Obscurum has the standard minimal production job in tact, as well as the hazy, grinding riffage that is so intrinsic to this sound. It’s on full display during opener “Vetus Obscurum” (what is this? Their “Iron Maiden”), which gradually settles into a bleak mid-section that is as oppressive as they come.

Punchy melodies and pro-Burzum guitar action highlight “The Omen From the East,” while a brisk, urgent tempo keeps “Antidote to Humanity” up and in motion. Capping matters off is the title track, which is perhaps the only misfire on the EP, lacking the gripping melodies and gloomy atmosphere of its predecessors.

Given the relative quality coming out of the Drawn and Quartered camp, it’s hard not to get behind Vetus Obscurum. Where it lacks in originality, it more than makes up for well-crafted, moderately earnest black metal cuts. By no stretch a world-beater, just another notch in the BM bedpost.