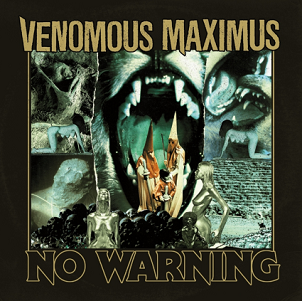 Certainly one of, if not the most distinguishable band on throwback metal stronghold label Shadow Kingdom, Houston’s Venomous Maximus made inroads via 2015’s Firewalker. A collection of sludge-on-traditional metal, Firewalker created separation largely because of vocalist Gregg Higgins. Far from your regular sludge in-key mumbler or trad-metal heaver, Higgins’ unique vocal inflections (think a Goth dude who realized he could sing and joined a metal band) is really what makes Venomous Maximus stand out. As such, it’s with little surprise the formula is repeated on No Warning.

The songs this ‘go-round don’t have much of a classic metal sheen, with the Texans going a more straightforward route. Of course, that doesn’t account for obvious album highlight “Spellbound,” a near dance-like rocker mainly because of the shuffle beat drummer Bongo puts on the song. It’s perhaps the most “alternative”-sounding song Venomous Maximus have popped out and it’s a highly effective one thanks to Higgins’ vocal layers and quasi-Goth riffing. The band’s dark side gets a go on “Pray for Me,” which serves up some choice melodic riffing, while “All of My Dreams” and “Endless” are excellent acoustic-driven, folk rock detours.

But as noted, Venomous Maximus largely hinges upon the voice of Higgins. Aside from the aforementioned “Spellbound” and “Pray for Me,” he’s on point during the near-ten minute “Sea of Sleep,” a song that reins in a bout of climatic guitar solos and crescendos.

A largely clever album with (just-as) clever songwriting, No Warning matches Firewalker, if not slightly surpasses it. Venomous Maximus had already arrived via Firewalker. With No Warning, they prove they’re hanging around for a while.