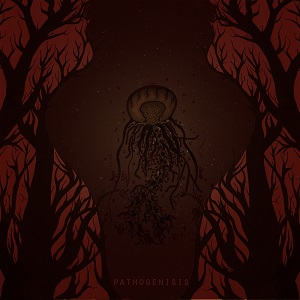 Originally formed sometime in the ’90s, when its members were poking around in hardcore unit Amend, Sweden’s V is one of those long-dormant projects finally willing to creep up and release an album. With the only other body of work to their credit being last year’s three-song VI EP, V clock in with the appropriate meld of post-metal and sludge, which in Swedish terms, is basically a look directly at Cult of Luna and their rather sizable resume. On Pathogenisis, V falls in line with a growing succession of Swedish outfits taking cues from the band responsible for the monstrous Somewhere Along the Highway.

One semi-big name is present: Former Katatonia drummer Daniel Liljekvist, who since leaving the band in 2014, has taken up a handful of bands, including the mighty In Mourning. Here, he’s just holding down the back-beat and playing it half-time. The familiar brutish, but almost dry guitar tone is present and dominating, showcasing V’s rather basic riff formula, of which drives opener “Souls of the Nearly Departed” and “Perfect Predator Pattern,” an otherwise hefty slab of post-metal of the Neurosis variety.

So you can see what we’re getting at, V not having much inclination of looking beyond the Cult of Luna or Neurosis side of things, although you will get some harsh(er) vocals from Andreas Baier. Aside from that slight differentiation, V plays it by the book on Pathogenisis, failing to offer up anything of substance, but providing reassurance that post-metal is alive and well in their neck of the woods.