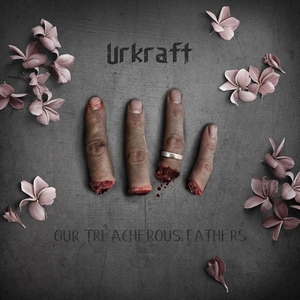 Talk about a blast from the past! Danish act Urkraft stems back to the 1990s, and had three releases on Earache Records in the mid-2000s. But the band disappeared following that span of releases, never really getting pushed into the upper echelon of the death metal spectrum (though some might argue melodeath as well in this case). The band has now returned this year, and Our Treacherous Fathers is their fourth full-length, and first in over a decade.

The first thing that sticks out for Urkraft, for better or worse, is that of their tempo. Our Treacherous Fathers rarely leaves the mid-tempo zone – the band choosing to spend it’s time working on melodies and groove instead of attempting to accelerate the process. To their credit, there’s a lot of melodies to be had because of this. The unfortunate part is that while the band is plugging away, much of the energy is simply lacking. A few tracks towards the end, like “Descending Shadows” and “Crown of Blood” nix this trend with some more variety and heaviness, it feels a bit too little, too late. The opening tracks may have some solid guitar solos and melodies, they don’t stand out as much as they should given the landscape. The title track, for instance, tends to churn along but nothing really grabs your attention the way other similar acts can. The tempo instead feels a bit lethargic (even with a few gleaming melodies towards the end). You are left with a feeling that it’s “okay,” but not much of a reason to return to it.

While the mid-tempo chug can be an effective piece to a band’s repertoire, Urkraft seem to rely on it a bit too heavily. They have some moments where great melodies sneak in, but the samey-sounding vibe of the tracks begins to take a toll on the listener before it comes to an end.