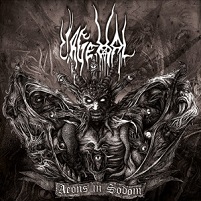 An unfortunate set of circumstances surrounded the creation of Urgehal’s Aeons in Sodom. Vocalist/guitarist Tronr Nefas passed away in 2012, effectively putting the band on ice permanently. A shame considering the band’s 2009 Ikonoklast effort was warmly received, cited as a true, unwavering go at pure Norwegian black metal. Fortunately, Nefas had recorded enough material prior to his death to comprise of what is now the band’s last album, Aeons in Sodom.

Urgehal took a fun (such a term in black metal should be taken in context) approach to filling Nefas’s vocal spot: they brought in a litany of guest vocalists. The names, of course, are some of the most recognizable in the scene, starting with Darkthrone throat Nocturno Culto, who lends his trademark vocals to “The Iron Children.” The song itself runs along the derivative side, so perhaps it’s more of an homage to Darkthrone than anything else. Nevertheless, Carpathian Forest mainman Nattefrost turns up on “Endetid,” the album’s most inspired number, stocked with oddball melodic twists and turns.

What could have been a novelty album turned into a dead-serious, heartened affair. Aeons in Sodom effectively concludes a career for Urgehal that was on the ascent, leaving behind a handful of albums that flew under the radar (especially over here in North America), but left their indelible mark on the glorious, but complicated history of Norwegian black metal.