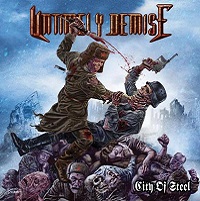 There should be some type of “Thrash Starter Kit” so bands that want to latch themselves to the teat of 80’s thrash don’t have to put in too much work. There’s still such a deluge of bands aping and raping the vintage sounds of Exodus, Destruction, et al that it hurts a band like Canada’s Untimely Demise, who by all appearances, want to do something a little different by injecting punchy melodies into their sound. On their second album City of Steel, they do just enough to separate themselves from the thrash pack.

Produced by former King Diamond/Megadeth guitarist Glen Drover, City of Steelsounds like any thrash record should, meaning it’s snappy, dry, and partially raw. When the polka beats get into action on opener “Virtue In Death,” it’s pretty clear where this one is headed, although the galloping Maiden melodies and black metal-like rasp of Matt Cuthbertson would suggest a different angle, perhaps in line with Skeletonwitch.

Outside of the perky melodic portions of “Hunting Evil” and the excellent “Unmaker,” there’s little else to suggest Untimely Demise are just another band that happened to pounce on the retro thrash movement. However, unlike their contemporaries, the band might have a fighting chance if they really hunkered down and made a concerted effort to not follow everyone else. Which is hard. We understand…kind of. 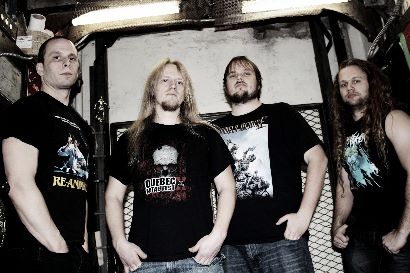 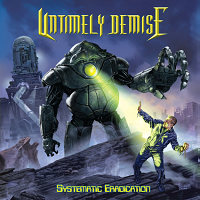