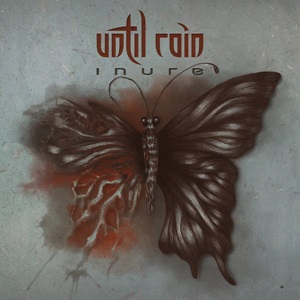 Transforming under three different monikers from 2004-2009 to finally settle on Until Rain, this Greek progressive metal sextet has two previous albums and an EP in terms of career work. Although for most North Americans, Inure could be their initial introduction to their studio outings, given the smaller distribution channels foreign labels such as Steel Gallery and Escape Music have here. Previously privy to 2013’s splendid Anthem to Creation effort, hopes are high that the continual dynamic intricacies and exciting hooks/musical interplay remain on the follow up.

We all know at this point progressive metal as a descriptive term can encompass a wide swath of styles – Devin Townsend, Tool, Periphery to name a few ushering in a new breed away from the Dream Theater, Fates Warning, Queensrÿche style that epitomized the 80’s and early 90’s. Until Rain plant themselves firmly in the latter camp, but do not dismiss many of the ambient, atmospheric, and modern techniques the former crop of artists developed to establish creatively a wider, dynamic scope in terms of the songwriting. For instance, gruff Scar Symmetry-ish death bellows as well as distant, ambient voices supplement certain riff sequences on “Because Something Might Happen” to catch the listener off guard, never sacrificing the off-time instrumental action as organ-oriented keyboards add a throwback feel to the epic nine-minute and change arrangement. The ivory action from Lefteris Germenlis consists of more than syncopated arpeggio/ neoclassical runs – the man can bring some 70’s pomp rock to the table a la Elton John/ Styx during “This Fear”, the type of interplay that makes you sit up and take notice. Unafraid to open many songs in reflective, atmospheric ways, “A Tearful Farewell” allows vocalist Cons Marg and secondary singer Donna Zed a chance to flex their lower and middle register melodies – soothing and sultry with slight pop sensibilities. Djent-style riffing and rhythm action comes up in spots of “This Solitude”, a darker, slightly aggressive offering that contrasts with spacious melodies midway through, a standout cut because of the bass/keyboard jamming against some intriguing clean/electric guitar phrasing.

The subtleties and contrasts work in Until Rain’s favor throughout – doomy tempos against thunderous guitars, twin vocal harmonies, ambient meets exotic keyboard strains giving chase to a progressive metal chops clinic – it’s all in there and more over the course of ten tracks and 67 minutes of music. Those who love the versatility of Shadow Gallery, the adventure of Circus Maximus, and those left field twists mentioned above will slot Inure to their preferred listening device quickly.