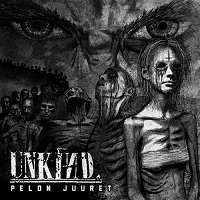 If Finland’s Unkind were smart in the marketing department, they’d come up with a shirt that says “Unkind Mind Grind.” For starters, rhyming is fun and easy, and then you throw in the grind aspect of the band’s sound and…boom! Instant profits.  Even if the band’s crust-riddled grind (or should it be “grind-riddled crust?”) is a byproduct of at least 30 other outfits, they manage to whip a relatively unstable and largely enjoyable maelstrom on Pelon Jurret.

Sung entirely in the band’s native tongue, Pelon Juuret doesn’t lunge from the buzzing guitar tone of their Swedish neighbors. It’s a more stripped-down sound, somewhat in line with what Kurt Ballou is producing at his GodCity Studios here in America, only Unkind don’t have the piles of soot all over their songs like Ballou’s bands do. Nevertheless, the darkened, hanging-out-in-the-back melodic pull of “Vihan Lapset,” is pretty rattling in an unconventional sense. Roughly ¾’s of these bands wouldn’t know what a melody was if it fell into their soy lattes, so the fact Unkind wrestles with harmonious guitar lines on this particular tune, as well as “Viallinen” and the brutal “Olemisen Pelko,” bodes well for the greater good.

A big pat on the back to these Finns for taking what is one metal’s most restrictive and conventional styles and having the acumen to bolster it with melody. Such moves are always a hit in the DR’s neck of the woods, making Pelon Juuret the grind find of the year.