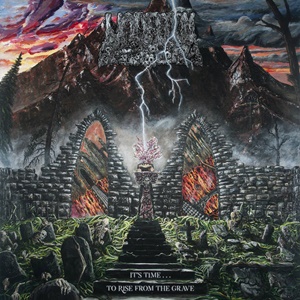 Purity in old school death has come back in vogue – it’s as if you need 15-20 years to truly spawn renewed interest in an original style. Undeath are a western NY band that live for the days when Cannibal Corpse, Autopsy, and Bolt Thrower first gained acclaim in the late 1980’s/ early 1990’s – wasting no time when it comes to developing brutal, catchy riffs, equally vicious growls, and this groove/pounding tempo sensibility that penetrates track after track. Their second album It’s Time…To Rise from the Grave features ten cuts of heads down death, keeping the production values and tones familiar to those old school ethics while severing heads and limbs in the process.

Intertwining mid-tempo churning passages with occasional bursts of semi-blasting speed or cutting things in half for swirling groove-laden parts allows Undeath to never remain stagnant. Most will be circling the drains to the meaty hooks placed throughout “Necrobionics” for example, the double kick action against the dual Kyle Beam/Jared Welch axe attack almost taking “Seek and Destroy” textures to a deadly dimension. Well thought out transitions add dynamic versatility to the faster songs – “Funeral Within” an ideal example as the tremolo parts shift into some lower, militant marching-oriented accents, drummer Matt Browning delivering some nifty fills in the instrumental sections. ‘The final…hour…is at hand!’ reverberates at the start of “Human Chandelier”, vocalist Alexander Jones bellows – another bone chilling winner, melodic guitar twists appearing here and there against another swarming musical parade that takes command of your soul instantly. Matt doubles up on the fine artwork, captivating in a way that Dan Seagrave has for decades in this genre.

While other bands may have struggled to be inspired in a two-year pandemic lull for shows, Undeath took the creative tact route and now have two albums to draw from when hitting the road. Early death metal mavens will love It’s Time…To Rise from the Grave, and maybe educate the newer brigade on the greatness of this timeless style.