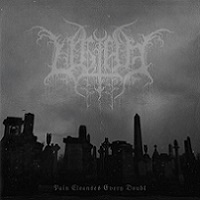 Originally released in 2015 by Ecocentric Records in Germany, Ultha’s Pain Cleanses Every Doubt is receiving proper stateside release via Translation Loss in the here and now. Formed in 2014, the band is comprised of a bunch of dudes who have previously done time in sludge and post-metal bands, which helps subscribe to the notion that yes, playing black metal is pretty alluring. On Pain Cleanses Every Doubt, the Germans put in otherwise sturdy and confrontational display of hazy black metal.

Largely crossing paths with the sinister, crust-caked path blazed by the Scandinavian lot, Ultha aren’t adverse to atmospheric plunges. “Perpetual Resurrection” would be the best example of this, with the band starting the song with a stream of sullen guitar lines, which dovetails into sludge-added BM. Granted, there are just four cuts here (the album doesn’t reach the 40-minute mark), so one needs to pick his or her spots, like on the crashing, banging “You Exist for Nothing,” which serves as the album’s most combustible number thanks to its array of tumultuous blasts and buzzing riffs.

While the canvas Ultha is painting on rings awfully familiar at times, their ability to be brazen without being offensive and/or unlistenable serves them well across Pain Cleanses Every Doubt. And even though the literal, actual sound of black metal is becoming more frayed (and confusing) by the day, having the exact representation of it serves of some comfort.