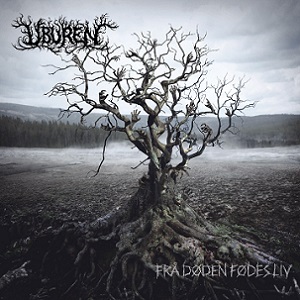 Norway is obviously known for its black metal export these days, so it’s not a huge shocker Ubruren hail from the mighty motherland with this style firmly it tow. Formed in 2010, these Norsemen harken their sound back to a more potent form of the black metal sound that is reminiscent of fellow countrymen Hades (or Hades Almighty if you prefer) and old Enslaved, Viking references and all. You see, before Viking metal was a common term metal fans associated with melodic death metal, it was used by early black metal bands as an aesthetic and colorful back drop to draw reference material from. Not that I have an issue with the unnamed melodic death metal act, but to split hairs, there is a difference for the sake of metal history.

While Uburen sing in their native tongue (mostly) about the exploits of the harsh Viking life, their music is black metal to the bone, and as soon as Fra Doden Fodes Liv begins there is no mistaking that. Uburen’s sound is rooted in a filthier time when staccato riffs and hell screeching vocals reigned supreme. Cuts like “Martyrens Kammer” and “I Become” are prime examples of old school black metal that doesn’t give a fuck about you or your latest trend, the latter sounding a lot like early era Darkthrone (a very good thing in my opinion).

Fra Doden Fodes Liv is a bleak affair and is virtually devoid of melody or joy, singing songs of sorrow and misery but delivered with an iron fist. Though I can always appreciate a solid slab of unrelenting black metal fury, Uburen don’t really vary up their riffing enough to make Fra Doden Fodes Liv an entirely engaging listen, and when you reach the end track, “Our Land on Fire”, you’ll have a hard time remembering much about the album unfortunately. Such is the price for playing this style of black metal, as most of these riffs have been played on another album from decades ago. That said Uburen still deliver their message with enough (extreme) aggression that acolytes of the real stuff should give it a chance.