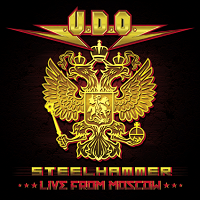 The war of words between Accept and Udo Dirkschneider? Most awesome. It’s the type of back-and-forth the press can get plenty of mileage on, while giving fans ample reason for debate over which incarnation of Accept is superior. It’s hard to dispute the results of modern Accept, with American Mark Tornillo out front – they’ve certainly exceeded virtually all expectations for a band replacing a legendary vocalist. As for Mr. Dirkschneider, he’s long stuck to the belief that his eponymous solo band should be his priority, and based on the band’s impressive output, it sure looks like he’s not missing Accept. (Unless his bank account does.)

Rather obvious what Live From Moscow is about: the U.D.O. playing in Moscow while in support of last year’s well-received Steelhammer album. At two discs, there’s ample amount of focus on the man’s more recent material, with very little in terms of Accept songs, save for the closing bout of “Metal Heart,” which the audience had to sit through over 90 minutes to get to. (Talk about sticking with one’s solo material – imagine if Sebastian Bach or Geoff Tate tried something similar. Tomato city.) But it is the punchy “King of Mean,” (awesome title) mid-tempo, steely “They Want War,” and dramatic balladry of “In the Darkness” that resonate the most.

With Dirkschneider, his limited vocal range is often his strongest sword, perpetually akin to a cat hacking up a furball, or something similar. He’s certainly an acquired taste, particularly for those who didn’t come up through the synchronized, twin-guitar Restless and Wild/Balls to the Walls days. But, considering he doesn’t have to over-extend himself vocally, ‘ole Udo can probably keep doing this until he keels over. Based on how long and vigorous Live From Moscow is, no one should put it past him.