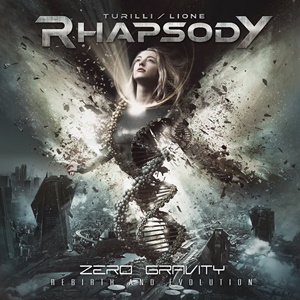 Innovation breeds imitators. Especially prevalent in the metal genre – once someone takes off to critical acclaim and commercial success, impressionable musicians flock to said band(s) and siphon off their take on that specific style. When it comes to the symphonic/orchestration overflow in various metal subgenres – names like Nightwish, Dimmu Borgir, and Rhapsody come to the forefront – the latter incorporating a power/bombastic platform with a cinematic/fantasy saga to capture the hearts and imaginations of hundreds of thousands worldwide. Guitarist Luca Turilli and vocalist Fabio Lione formed this new unit following two years of touring for Rhapsody in their 20th anniversary incarnation – seeking once again to develop something fresh and new. Successfully executing a crowdfunding campaign to add the ambitious financial undertaking for Zero Gravity (Rebirth and Evolution), it’s a record that while still symphonic and cinematic contains more of a wider array of progressive, exotic, and modern / electronic influences that shimmers and resonates as a new chapter to an already fabulous career.

You get everything from special guests like Amaranthe’s Elize Ryd on “D.N.A. (Demon and Angels)”, a heavier, down-tuned guitar tone, rich choir/ orchestration activities, and this propulsive nature to many other songs that reminds the listener of the risk taking nature Dream Theater possess throughout their career. Fabio Lione gains plenty of opportunity to showcase his one of a kind delivery – rising and ascending to the dramatic musical passages of the title track, Indian,Tibetan and Persian instrumentation and chants giving the mid-section a dynamic aural reprieve. Beyond the philosophy and positive psychology/ self-actualizing lyrical content that differs from what one has expected with these gentlemen in the past, it’s apparent throughout the record that Turilli/ Lione Rhapsody fill every crevice with layers of musical thoughts – but don’t forget that their hearts still reside in the metal landscape, even if there are outside influences of Queen (vocally) and electronic/cyber accents to diversify the proceedings. It’s the type of record at ten tracks and 52 minutes that each successive listen allows the brain, ears, and body to process and catch something different and new – especially if listened at intensive and active paces. Standouts currently include the progressive, melodic keyboard/guitar syncopation throughout “Decoding the Universe”, the Dream Theater/”Metropolis”-esque accents during “Multidimensional” and the bombastic closer “Arcanum (Da Vinci’s Enigma)” that rivals Therion for heightened mood swings / tension execution.

This will gain modest attention right away due to these musicians and their previous work. Fortunately, they’ve gotten off to an incredible start with this new band, and the future looks quite promising if the innovation and attention to detail continues.