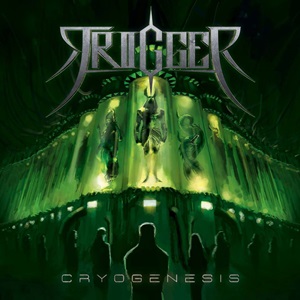 Australian metal no longer feels isolated – internet borders come crumbling down as people seek fresh sounds. Coming across my social media landscape thanks to Andrew Hudson of Harlott, Trigger are a five-piece outfit out of Melbourne and together since early 2012. They released the Machina EP two years later, setting themselves up for their first full-length on Aussie label Hellfire Records. Aligning with the superior knowledge and recording skills of Chris Themelco from Orpheus Omega, what we have here is a 10 track effort packed with everything from melodic and groove metal to thrash and death nuances that take shape from both the North American and European landscapes.

Instantly noticeable are the twin harmony and solid rhythm skills of the Sean Solley/Luke Ashley axe team. Unafraid to inject the right melodic run to ramp up anticipation for the next riff salvo, check out the twists within “Echoes of the Unsilenced” and uplifting, triplet heavy “Alexandria” for vestiges of Trivium, Iron Maiden, and the almighty Megadeth (Rust in Peace era especially) in terms of the spirit and execution of this material. A speedy verse delivery from Tim Leopold switches off between Chuck Billy-ish caustic screams/bellows and controlled mid-range clean melodies for “DeluZion”, while the keyboard accents and off-time rhythms during the Middle-Eastern flavored “Crowned” encompass the best aspects of In Flames old and relatively new (sans the emo-core side of things).

Cryogenesis succeeds due to smart hook lines and logical part to part construction – everything flows seamlessly while not succumbing to unnecessary excess in any department. You’ll feel the tribal march aspect that builds to a crescendo for “Tethered to the Tide”, a ripping thrash exercise featuring massive background vocals of both the gang and harmony variety, while also shifting moods into somber, distant horizons throughout the closer “Veins of Ambrosia” – many of the twists and turns sure to elicit cheers and swirling pits or crowd surfing. Plus the cover art amplifies the intensity of what you take in musically from Trigger – topping off an already attractive package. Those of you who love cross-pollination of melodic metal, thrash, and groove with plenty of guitar harmonies and catchy choruses to sing along with, Trigger should be the next act you champion.