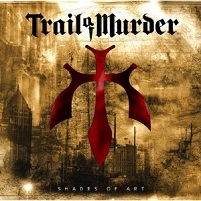 Owner of one of the best names in power metal, along with a killer set of pipes, Swedish vocalist Urban Breed has been a musical nomad since his departure from Tad Morose in 2005. Breed has done time in no less than five bands since leaving TM, none of which have equaled his work on melodic power metal gems such as Matters of the Dark and most notably, Modus Vivendi, the album that should have broke Tad Morose big. However, being a vocalist of Breed’s stature does ensure something: he’ll never struggle to find work.

Breed’s newest band is the poorly-named Trail of Murder. Joined by former Tad Morose lead guitarist Daniel Olsson, along with Bloodbound/Morgana Lefay drummer Pelle Akerlund, bassist Johan Bergquist, and guitarist Hasse Eismar, TOM and their Shades of Art debut is the closest replica of Tad Morose from Breed to date. The style heads right for the hallowed mid-tempo, hook-laden sound of TM circa 2004, thus giving Breed all the room he needs in which to operate. Naturally, the man doesn’t disappoint, demonstrating his grit on “Carnivore,” and “Mab,” where his patented gang vocal layering comes in handy when the chorus hits. A rousing moment, destined for live glory indeed.

Shades of Art doesn’t quite have the same pop and force Tad Morose did, so some of these songs dangle off AOR edges, like “I Know Shadows,” and “The Song You Never Sang.” While this isn’t Breed’s long-suit, he’s savvy enough of a singer to keep these tunes out of malaise territory. Fortunately, “Higher,” “Nightmares I Stole,” and “Child of Darkest Night,” uphold the meat and potatoes power metal end that is obviously, the band’s strength.

As you can tell, Blistering still laments Breed’s departure from Tad Morose, the main reason being that Modus Viviendi is one of the best melodic metal albums of the last ten years. Breed’s voice can be dropped in anywhere, thankfully, and if he can keep things together with Trail of Murder, there’s little question they’ll improve upon Shades of Art. Tad Morose only got better with each album, methinks the same will happen here.