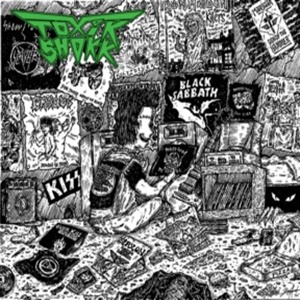 Finally, an album cover that relates to this scribe’s bedroom during those adolescent and teenage years – Toxik Shokk capture the essence of key metal aesthetics through Story of Our Life as the boy stares at favored bands, album covers, and posters surrounding his environment. It’s interesting that many of the picks also factor into the quartet’s thrash style – as these 11 songs embrace everything from NWOBHM to speed/thrash along with a touch of the punk/death edge when called for to keep the proceedings raw and relevant. Together since 2013, the band only released a four song demo the following year, developing more material and playing out in Germany while gathering the funds and experience necessary to issue this follow-up.

The first seven songs are the newest in the Toxik Shokk catalog, a glimpse into the group’s penchant for mid-tempo to speedier guitars, gang-like background vocals that work brilliantly for chorus emphasis, and a rhythm section that can go balls out one moment, but sit into groove/mosh-like pastures the next. The Bay Area movement factors into the stairstep guitar action on the title cut and “Bleeding Red”, Matze Ru laying down some furious hand whipping on the frets a la Exodus and Metallica. The European edge comes bursting forth on the follow up “Got Scared?”, the acidic/sadistic moans that pour out of Christian ‘Zottel’ Müller resembling a clearer Mille if thrown through a whiskey soaked sandpaper refinery. People will be hard pressed to not throw each other into convulsive pits of rage to the dominating riffs of “Sleep Work Eat” – a mantra the common person certainly embraces in mind-numbing fashion. The children’s nursery rhyme that starts “Dream On” gives the listener a small reprieve, while Christian switches between his normal snarl and this clean talking activity that seems a bit odd against the crunchy, up-tempo music. The four older songs from the demo surprisingly hold up well against the newer offerings, “Against” roaring through the atmosphere while “Screaming” containing an ominous, almost Slayer-like vibe, especially in the ride cymbal/Dave Lombardo section of the arrangement.

Story of Our Life won’t necessarily push Toxik Shokk into the ranks of ‘must see/must buy’ acts in their genre – but it’s definitely solid and gets the job done if you want to erase any negative feelings about your daily toil.