To The Rats and Wolves – Dethroned (Arising Empire) 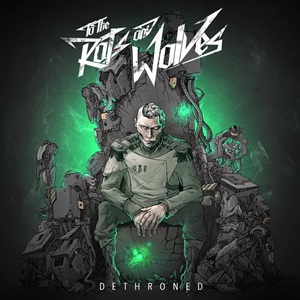 Technology advances have infiltrated the heavy music scene: laptops, processors, samplers, triggers and so on and so forth to make what you hear on record sound spot on live now more than ever. As a result, electronic/dance elements add a swinging fresh element to standard aggressive tenets that exist through guitars, bass, drums and vocals. So it’s not shocking that Essen, Germany’s To The Rats and Wolves in a scant five years have gained digital traction from their first single to debut album Neverland – signing with Arising Empire and now ready to conquer on the follow-up Dethroned.

Fusing a trance-oriented keyboard/drumming platform into the post-hardcore/metalcore template may sound enticing, but it all depends on where you sit on this cross-pollination whether the sextet strikes a chord adequately. At times the catchy choruses and simplified music progressions can bring up a lot of Linkin Park comparisons for “The Abyss”, whereas opener “Riot” throws itself more in the build-up intensity and natural, low-tone guitar breakdown department that is metalcore 101. Conscious input for sing-a-long elements of both the clean and screaming variety puts “The Game” and hypnotic “Prototype” at the top of the chain, while the music has the low tuned grooves, staccato / high gain flurry, and bounce that makes pogo human walls possible. The zombie virus narrative opening to “Outbreak” provides dynamic relief, as this song is probably the most industrial-oriented in To The Rats and Wolves bag of tricks.

Stunted melodies, breakdowns, easy on the brain choruses, and an electronic meets metalcore fusion that gels like peanut butter and (choose your favorite second food here… this scribe takes jelly). It’s not surprisingly bad… but nothing exciting and exhilarating either. Don’t know if exactly the ravers and metalheads can unite for this one… but kudos for trying.