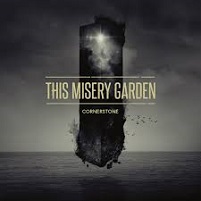 Bands should be wary of making improper associations to Katatonia. That’s sacred ground we’re talking about. If you’re going to use the Swedes as a reference point, then you’d be best able to deliver the goods, not some half-baked alternative metal album with a dearth of hooks and ideas. If more bands took the same route as Switzerland’s This Misery Garden, then the good (and invincible name) of Katatonia might be soiled. (Note: Katatonia bias could not be more obvious. There’s your disclaimer.)

Cornerstone is the sophomore effort from This Misery Garden, a band who got their start in 2005. While having the good mind to hook up with Jens Borgen (Katatonia, Opeth, Paradise Lost) for mastering duties, this in no way excludes the Swiss troupe from tepid and drab wannabe Goth rock. It’s like Breaking Benjamin, with a Swiss twist. FM rock displaced from the early 00’s, directed toward the fringe (and not cool) group of listeners who don’t like things heavy, but don’t like them soft either. The listless “Angry Child,” plain “Crowded Hallway,” and quirky “Death Head Colors” are enough proof to suggest This Misery Garden have a long way to go before relevance.