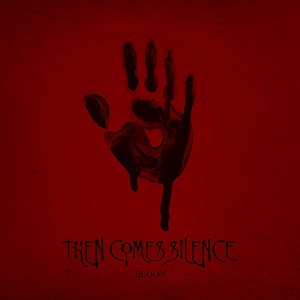 Nuclear Blast’s entry into the soon-to-be-overstocked post-punk/death rock scene, Sweden’s Then Comes Silence are like the cool, hip band that can hang with us metal folk but also set up shop at any Goth night and have no problem. This is not to say the Swedes are metal — they’re definitely not, an element that sometimes gets lost in the shuffle because of the label they happen to be on. Led by bassist/synth man/vocalist Alex Svenson, Then Comes Silence issued three albums prior to their joining up with Nuclear Blast. While those may have been of quality and substance, it’s fair to say they’re not nearly as timely as Blood, which is hitting and happening at the perfect time.

The idea, it would seem, is to re-route the ‘80s Goth rock aesthetic through post-punk. There’s the necessary strobe-light flashing bounce to the drums on opener “The Dead Cry for No One” and lead single “Strange Kicks,” which is the album’s most infectious cut. It latches on with its dance groove (lots of hi-hat action from drummer Jonas Fransson. The Goth-wave element is further emphasized on the Sisters of Mercy-like “My Bones” and synth-dominated “Good Friday,” which again, takes cues from the Sisters of Mercy/Joy Division songwriting playbook where Svenson cuts out sung-spoken vocals and spiraling riffs. And just because they’re releasing albums at nearly the same time, you could easily line up “The Rest Will Follow” with virtually any song on Grave Pleasures’ new Motherblood. Similarities run-a-plenty.

Not as outwardly contagious as the aforementioned Grave Pleasures album or deep and captivating as Soror Dolorosa’s brilliant Apollo, Blood casts a wide net over a sound that has a nostalgic factor for many. The trick, really, is to somehow funnel and/or capture it properly for today’s age without totally aping the 80s as a whole. Then Comes Silence does quite the balancing act on Blood, intentional tribute or not.