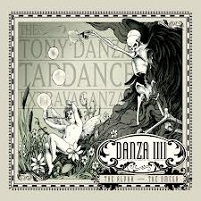 In short, this is goddamn awful. If that was all you needed to know, fantastic, you may blissfully wander off back into your life, ignorant of the horrors this album holds. For the rest, proceed at your peril. From the outset to almost the closing seconds (more on that later) the band, its tired sound, and ridiculous name, have never had much going for it and that continues to be the case with Danza IIII: The Alpha – The Omega. At 15 tracks and an obscenely bloated hour long run time, The Tony Danza Tapdance Extravaganza have succeeded only in building a monument the old hat and thoroughly sterile.

From the get-go the integration of djent-like aesthetics and the Meshuggahesque pulse is overwhelmingly present and bleeding from every corner of the album. Whether on opener “Behind Those Eyes,” “Canadian Bacon,” or “The Alpha the Omega” randomly stopping at any particular point in these songs will grant the listener almost the exact same experience, for they all run together as a giant homogenous blur. Programmed-sounding drums punctuate the same kind of jagged rhythms and semi-breakdowns at every turn, some rare semblance of pleasure to be had in the chorus-like section of “This Cut Was the Deepest” only to find itself immediately snuffed back out with ongoing waves of pummel-prone wankery.

Ordinarily, this is the part where from the muck some faint shining light will emerge to highlight that it isn’t all bad and it isn’t all lost. Not here. The over-long atmospheric bleedout of “Some Things Are Better Left Unsaid” only reinforcing that this monstrosity is spread much far on way too few ideas. Though seemingly comedic in orientation given the name of the band and the demeanor of the promotional materials, what’s here is hardly amusing. All the tracks on hand (short instrumental “Disconnecting Pt 1” notwithstanding) existing as exhausting explorations of the soulless side of the djent sound, any joy quickly lost in a seemingly endless sea of chugging and screaming. Only in the second half of closer “This Is Forever” does the band find any real kind of redemption. By that point however, it’s much too late, an hour already spent and an hour you cannot get back. This is for tweens and angst-ridden teenagers only.