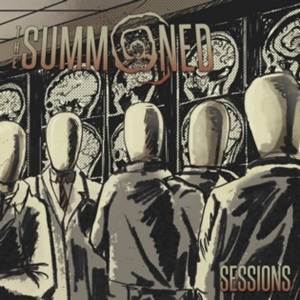 It’s no secret much of the staff on this site prefer bands proficient and forward thinking at their craft – propelling metal and its offshoots into mind-altering terrain. Hailing from northern Massachusetts, The Summoned have accomplished so much in their ten-year existence, even as an independent act. Multiple tours taking them to Canada and various parts of the United States, EP, single, and album releases – beyond opening for heavyweights like The Faceless, Between the Buried and Me, Overkill, and Vader to name a few. Sessions is their second full-length and first studio effort in almost six years, delivering nine songs of crushing technical metal that is progressive, experimental, variant, yet also alluring and quite memorable given its inherent complexities.

The material can be dense with a flurry of ideas swirling, twisting, ebbing and flowing – the quartet often taking a specific riff to its furthest reaches of jazzy/progressive offshoots, be it heavier or groovier into mathematical combinations unexpected. Employing clean and extreme vocals also aids the cause, as relatively smoother sections within “Fractal Patterns” switch up the normal rhythmic, blood vessel bursting larynx legwork Steve Thompson provides. Shaun Murphy and Jarred Sullivan delve into everything from Death to Vektor, Between the Buried and Me to Cynic or even Periphery and all layers in between when it comes to filling the axe landscape for riffing, lead breaks, and killer intuitive maneuvers – you’d be hard pressed to not find something jaw-dropping about their work. Check out the crawling Voivod-like dissonant, Morse Code-ish picking/chord combinations for “The Pendulum Swing” or the serene 2:15-3:04 swath within head crusher “The Grave Mistake” to appreciate the supreme mastery and concoctions taking place. All of this would be for naught if the band did not take groove or hook factors into consideration. Fortunately for the listeners, they are aplenty, as “Built of Glass” and spacious “Vertiginous” keep that aspect top of mind while The Summoned tantalize and aurally dance about in tech death, progressive metal splendor.

Sessions puts The Summoned near the top for technical metal after multiple playbacks – complex thoughts siphoned into manageable constructs, assuring a thorough and entertaining listening experience every time you put this on. Appreciate the multi-genre conversion as this band shouldn’t be independent for much longer based on the high-quality output and blistering live performances.