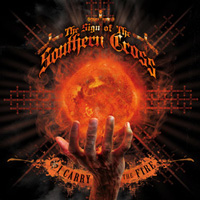 Name-lifting is tolerable in metal – everyone at some point will have to do it since all of the good names are taken, but blatant sound hi-jacking is simply not tolerable…and it never will be. Asheville, North Carolina’s The Sign of the Southern Cross (it’s a Black Sabbath song, with Dio, it rules, look it up) basically beg, borrow, and steal from the corpse of Pantera and to a lesser degree, Corrosion of Conformity. And to top it off, singer Seth Uldricks sounds exactly like Phil Anselmo.

I Carry the Fire is a three-song EP meant to serve as a primer for the band’s upcoming sophomore full-length (the band’s 2009’s debut Of Mountains and Moonshine was equally derivative). The riffs are meaty (like Pantera), and the grooves are in full-swing (like Pantera), and Uldricks employs the same vocal layering as Anselmo did throughout his career…while in Pantera. Heck, even some Down-like acoustic crowing is found on “If You Find Yourself Looking Back.”

Very hard to find the value in a band like TSOTSC, who offer absolutely nothing of worth, especially on an EP as sparse as this. Look at it this way: Should the time come when Pantera tribute bands start hitting the circuit in full-swing (methinks some already have), look no further than Uldricks. The man is a Pantera/Anselmo/Down incarnate. Gotta love imitation.