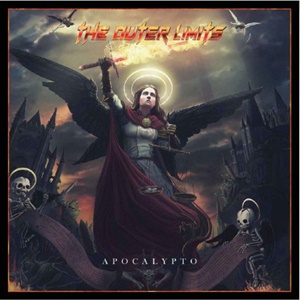 Returning for their second studio album, The Outer Limits hail from Bulgaria to deliver another solid round of thrash mechanics on Apocalypto. Location helps diversify the quintet’s outlook and approach, not necessarily entwined into a specific landscape but rather embracing a veritable influence stew from North America and Europe to differentiate their melodic stance through these nine tracks. It’s obvious even a few spins in that this group of musicians have spent some serious time not only studying the genre but also gaining technical prowess at their instruments – sending their abilities to the highest levels and ensuring stellar songwriting from the first cut to the last.

Eschewing any intro and getting right into the heart of the metal for “Outlive the Death”, it’s easy to tell that the back and forth rhythm section/ guitar blitzkrieg has designs on the best Bay Area/ East Coast finesse and strength – taking prime Exodus, Overkill, and Heathen to the hilt. Knowing when to accelerate and go from the proper transition puts “Coma” near the top of most memorable tracks for this record – uppity riffs and melodic accents during the verses make for a massive energy transference during the cleaner, atmospheric switch-up midway through where you can imagine a swirl of windmills or fists thrown high to the sky. The lead breaks could be a neoclassical exercise within themselves – while vocalist Georgy Peichev will assuredly raise eyebrows through his Russ Anderson / Forbidden-oriented range and power. There are even parts of “Greater Than God” or the title track where some of that Teutonic sophistication and attack come to the forefront, blazing a similar path as say Destruction when it comes to the pacing of the arrangement or assembly of riffs.

Keeping the record at a rather tidy 42-minutes also enhances long-term retention, making for a solid all-around affair for those who want a thrash album that has more melody and musicianship than the average act traversing the landscape.