The Mezmerist – The Innocent, The Forsaken, The Guilty (Shadow Kingdom) 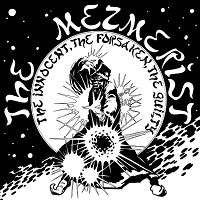 Bill Ward reportedly plays on the first four tracks of The Innocent, The Forsaken, The Guilty, a happening that is a mystery unless one picks up the physical version of this release for an explanation on the bonus DVD included. Now, given Ward’s potentially shaky mental state at the time (1983, so he just left a Dio-led Sabbath), you’d have to wonder why so much time has passed for it to be revealed he was a part of The Mezmerist, an occult rock outfit led by Tommy Mezmercado, a gentleman with a falsetto so high that it would make King Diamond blush. Any guess?

Once past Mezmercado’s really bad girly vocals on “Dead Ones Cry No More” and “Arabian Nights,” The Innocent turns into a marginally enjoyable display of proto metal. There’s no tell-tale sign of Ward’s trademark playing on the first four songs; no sign-posts, or giveaways, so it’s really down to the vocals and guitar playing of Mezmercado to define the album. So actually, it’s the mystical coo of “Kingdom of the Dead” that works, as well as the manic “No Family, No Friends.”

Apparently, the pre re-release version of this was fetching some major bucks on Ebay, so the allure and appeal might be stripped away now that it’s available for mass consumption. However, this is what Shadow Kingdom specializes in – digging up lost relics from the past, even if it seems like a former member of Sabbath doesn’t want to shout his involvement from the rooftops.  For real lost, lost, lost gem-seekers only.