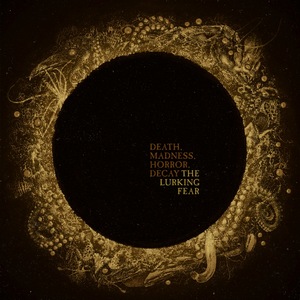 The Lurking Fear first released Out of the Voiceless Grave four years ago.  A supergroup of Swedish death metal, with members from At the Gates, Disfear, Skitsystem, and The Haunted (among others), it was pretty much sure to get some attention from the masses.  Listeners got exactly what they were expecting, which was grimy old school death metal with some Swedish buzzsaw guitar placed on top.  Death, Madness, Horror, Decay delivers the same basic formatting, which definitely works but doesn’t tend to stick out too much from what everyone else is doing with it.

With vocalist Tomas Lindberg at the vocal helm, you can be assured that it will sound quite agonizing, and the music behind him does its best to comply.  There’s generally two types of songs to be found: raging, no-holds bars short blasters that leave nothing in their wake, and some longer and doomier tracks that really dig into the atmosphere and darkness.  For every adrenaline-pumping cut like “Death Reborn,” there’s a song like the title track to really ooze in the dark, gritty atmosphere and lace it with some splendid sounding melodies.  Of course, there’s still some uptick in tempo with those tracks, and it makes for a more thrilling song overall.  That’s the one thing holding this release back from true greatness, truth be told.  The lengthier songs provide more personality than a simple speed run (not that there’s anything wrong with those from time to time), but the sheer number of them make the album simply good, as they tend to start blurring together in that death metal way.

That said, The Lurking Fear does provide exactly what one would hope for in an old school Swedish death metal album.  It’s brutal and energized, with enough melodies (particularly in the longer tracks) that make it a real thrill to listen to at times.  Just don’t expect it to be a game-changer for the genre.