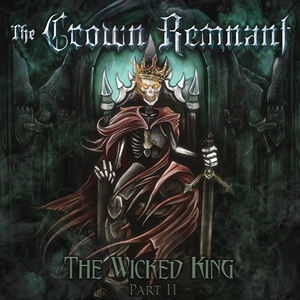 In heavy metal’s ability to stick outside of societal norms, its nice that we can experience solid concept albums, and in the case of The Crown Remnant, we can even experience a series of albums that all string back to the same concept. While understanding the concept isn’t required for the listening experience, it’s a feather in the cap that bands can use to deliver something special to the dedicated audience.

The Crown Remnant combine several different factors in their modern approach to metal. It seems odd to pull in the term metalcore, as a Killswitch/All that Remains-type affair this is not. But you can hear the influence of those bands, even veering into Avenged Sevenfold territory, as some of these songs begin to spread their wings. Some may gasp at such influences, but they are handled in a way that keeps the music surprisingly more epic in tone – they can bring in more melodic influences as well as more blisteringly fast extreme ones to bring some sort of balance to the whole thing. There’s an element of storytelling here that, even if you aren’t familiar with the concept, makes it feel like a full concept and it goes somewhere. The ebb and tide between heavier songs (“Inferno”) and more sullen melodic ones (“The Eternal Façade”) gives everything time to breath and sink in. The spot where things take a turn though, is in the production. For all of the cinematic scope and storytelling ability, it seems to make the listener really fight between hearing the riffage and the vocals. A little more breathing space for either would do the band a world of good, and it ends up keeping The Wicked King Part II from realizing its full potential.

The Crown Remnant bring a number of positive and unique aspects to the table with The Wicked King Part II. The sense of placement and diversity in writing keep it intriguing, but some production quirks make it a good album instead of a great one.