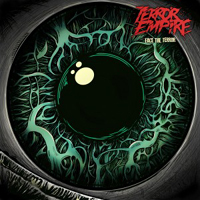 According to Terror Empire’s bio, their name represents “an omnipresent reality that has been exposed worldwide since the 9/11 attacks.” Interesting. Could modern-day thrash actually pack more of message than waxing on war, destruction, and partying? It seems that Portugal’s Terror Empire have their hearts (and heads) in the right place with their six-song Face the Terror debut. It’s suitably raw and raucous, with the occasionally technical riff that would make a play for lazier Coroner, and groove portions that push the Pantera envelope. At least they’re not stealing every Kreator riff known to man.

Six songs is usually the right amount for thrash of this ilk. It’s not like Terror Empire is hoisting the flag of variety, for Ricardo Martins’ bark tends to wear thin once into “Redemptive Punishment,” especially the portions where he sings about “spilling your blood.” Slayer did that in 1988, you know. Aside from that small gripe, the band does its job rather admirably by setting of some nimble and loose thrash riffs (see: “The Brave”), while injecting some groove and mid-tempo action on “Submission by Fear,” which is probably the best song of the lot thanks to a sharp opening Euro thrash riff.

A promising debut, Face the Terror sees Terror Empire do just about everything right. Frankly, there’s a lot more spirit and direction in an album like this than anything come out of the American retro thrash brigade. Surely Terror Empire is more concerned with watching CNN than adorning their faux jean jackets with patches.