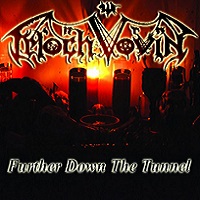 Occult/ceremonial black metal with an American twist has become a tough nut to crack. From the pure standpoint of style, there’s never quite the illustrious mass of atmosphere and fervor that would pull a listener in the way the more “general” black metal bands do. There’s not enough melodic flexibility, not to mention, the grand and complicated concepts often brought forth with some of these bands (i.e. Aosoth, Von, Black Witchery et al) sometimes override the music itself. The just is still out on Long Island’s Teloch Vovin, who four years since their formation, are on their third EP in the form of Further Down the Tunnel.

Five songs in which to work, one is a lullabye-like opener; the other an instrumental segue, so really, just three songs in all. The band’s sound hinges predominantly on the old, unorthodox meld of death and black metal (what else is new?). The fervent blasts and chaotic riffing that makes up “Thaumiel” demonstrates some promise, particularly in the way Teloch Vovin is able to work in complex transitions while delving out disharmonic riffing. “Vena Cave” emerges as the best of the bunch, a daunting BM racer that utilizes the caustic smear of Nordic riffing while a surplus of vocal layering nearly overtakes the song.

Yet with the two instrumentals, there’s not enough to chew on with Further Down the Tunnel. The EP feels a tad on the incomplete side with the band being better served tacking on a few “normal” cuts to even out the running order. ‘Tis not to be with Teloch Vovin and Further Down the Tunnel, who in order to join the weighty, ultra-competitive occult races, need to find more ways in which to showcase their wares.