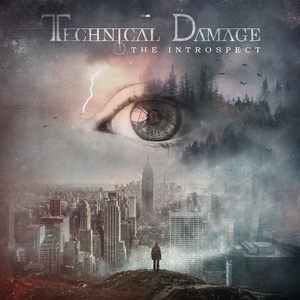 Proof that there’s more in a sound to a band than a name might convey, before listening to Technical Damage, this scribe was immediately picturing something, well, technical (specifically of the death metal variety). While it was a perception of the band that wasn’t entirely off-base, with their clear progressive tendencies and occasionally complex riffing, there is much more to The Introspect than just cold, precise death metal.

The Introspect actually borrows from a wide, sweeping view of extreme music today. There’s definitely a progressive edge to the band, which can move between more modern flavors (even swinging into some ‘core-inspired breakdowns and chugs) and some floaty, Fallujah-esque moments that pull in plenty of atmosphere. But the band continues to surprise as the album continues onwards (“Reflections” being one of the heavier and groovier tracks at the onset), and “Crystal Angels” goes so far as to introduce some full-out clean singing (there are some more spoken word stuff earlier on) while “Eviscerate” has a gorgeous clean guitar (which later takes a very danceable tone). The fun, risk-taking grooves of the title track that blurs into reggae territory are the last of these enjoyable diversions that sometimes feel a bit abrasive in their change-ups but are nonetheless a unique piece to their approach. If there’s one real thing holding it back, it’s that the heavier moments lack that same spunk, while they are heavy, they just lack the jovial risktaking the rest of the release provides and end up feeling more generic at times.

There’s always a place for props when a band decides to go outside the normal boundaries, and Technical Damage takes a good leap forward with The Introspect. The twists may sometimes feel like curveballs but there’s a certain charm to them and help to give them a more unique vibe. There’s some fertile ground here, and hopefully with the same level of care given to the heavy as well as melodic, Technical Damage will be really onto something special.