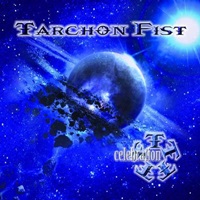 On the scene for just over a decade, Italy’s Tarchon Fist have released three full-lengths, a couple of demos, and this second compilation following My Graveyard Productions personal reasons for dropping the band. Never wavering in their commitment to the heavy metal cause, we get a 13 track record that features a lot of down to earth vocal melodies ready for audience augmentation, a duo of axe slingers ready to lay down a solid rhythm foundation while laying down the quick hitting twin harmonies and conventional bass/drum representation.

Primal Fear and Iron Maiden would be the prime suspects for Tarchon Fist’s influences, although vocalist Mirco ‘Ramon’ Ramondo has a little bit more of an accented edge to his natural Bruce Dickinson-esque range and higher note holds (check out the double ascension during the closing verse of “Eyes of Wolf”). The band prefer more of a mid-tempo anthem stance – the type where gang-oriented choruses appear in multiples of four, the riffing possessing that similar latch on/ repeat /rinse formula as the lyrical content champions “Fighters”, pirates (“Ancient Signs of the Pirates”) and of course the “Metal Legions”.

Despite outstanding lead break skills from Luciano ‘Lvcio” Tattini and Sergio ‘Rix’ Rizzo on “Thunderbolt” and a made for highway cut like “Still in Vice”, the major problems Tarchon Fist faces are the main hooks musically coming from the early to mid-1980’s, and top to bottom the tempos reside in a similar lackluster, non-descript quagmire of boredom. You almost want to give the quintet a series of energy drinks to create more excitement, and possibly jack up the power quotient… as falling asleep while listening to a heavy metal album is not ideal for long-term enjoyment.

They’ve performed a lot of shows in Italy and mainland Europe, but in this scribe’s view Celebration wouldn’t cause a rush to view Tarchon Fist live – so it’s probably back to the creative drawing board.