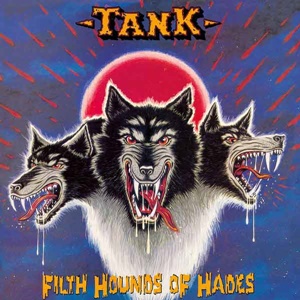 Another act in the flurry of UK activity that made the New Wave of British Heavy Metal a standout component to the history of this genre, Tank embrace a power trio format during their early 80’s development. Releasing a series of singles and the Don’t Walk Away EP during 1981-82, the debut album Filth Hounds of Hades has been a cult classic for many – receiving the reissue treatment in many other countries over the past few years. German label High Roller Records is the next in line to roll out a double vinyl edition – the main album coming out on standard 12 inch, while the four bonus cuts appear on a special 10-inch version.

The association with Motörhead in terms of raw, heavy rock and roll with a punk edge comes out in the sound – but also behind the boards with Fast Eddie Clarke as producer for the record. A steady supply of straightforward, high-energy tempos, equally blitzkrieg rhythms, and the hoarse, speedy vocal support from bassist Algy Ward kept the proceedings moving along swiftly. The double shot bluesy drive penetrating “Shellshock” and “Struck by Lightning” perfect openers to get all earth mavens and underground hordes excited. The older, heavy-handed licks and lead breaks from Peter Brabbs along with the swinging, shuffling backbone of Algy and drummer Mark Brabbs allow for some mesmerizing, catchy main hooks – “Blood, Guts and Beer” plus “Heavy Artillery” elevating themselves to fist waving appeasers. Peeling off one great track after another, the older generation still get a buzz for titles like “(He Fell in Love With a) Stormtrooper” and “Who Needs Love Songs” – while the bonus material includes the speedy “The Snake” plus Maiden-esque “Steppin’ on a Landmine” that make this a more attractive product.

The early 80’s was an exciting time to discover metal – Tank a worthy band to dig deeper into if you love your metal raw, traditional, and full of primal spirit.