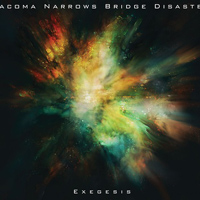 An expansive concept to go along with even more expansive progressive metal are part and parcel, it seems. One has to think a lot of these bands are scared to go the dumbed-down lyrical route because their music is the exact opposite; “smarted-up,” perhaps. Most progressive metal bands don’t let radical conceptual pieces to get in the way of their music, and neither did the U.K.’s oddly-named Tacoma Narrows Bridge Disaster (which is explained in this video). On their second album Exegesis, the Brits are able to squirm into the crosshairs of Tool-infused atmospheric rock and able-bodied prog, doing it quite effortlessly to boot.

Per the above note about Exegesis being a concept album, it’s storyline and lyrical bent derives from author Phillip K. Dick and his journal, where he collected thoughts and visions regarding religious symbolism. Playing the ‘ole religion card is nothing new in metal, yet the focus on a noted 20th century thinker breeds this sort of high-wire, high-brow aspect to TNBD that resonates throughout the album’s running time. To top it all off, singer/keyboardist Dylan Foulcher is selective with his vocals, serving in a complementary role to the band’s elongated instrumental treks.

The Tool comparisons are somewhat justified, although TNBD has the dainty sheen and flowery flow that Pelican circa 2005 were so attuned to. This pops up on album highlight “Black Iron Prison” and its follow-up, “Going Out Like Lights On A Switchboard.” Furthermore, the band’s musical precision and technical, yet not too technical angle is a refreshing and almost necessary respite for bands in this realm.

Bands that are cerebral without rubbing one’s nose in it like Tacoma Narrows Bridge Disaster seem to enjoy a longer shelf-life than most flash-in-the-pan prog/post rock bands. There’s an intellectual flair to Exegesis that exudes the same confidence Isis, the aforementioned Pelican and even someone like Explosions In the Sky did at their respective peaks. A worthy find, no question about it.