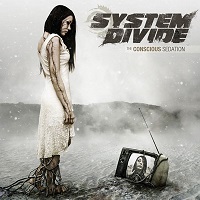 A multi-national act that dips into Israel (of all places) thanks to singer Miri Milman’s (ex-Distorted) involvement, System Divide is decidedly American-sounding, rife with pummelling deathcore chugs and keyboard swaths that rival the likes of Bleeding Through and Winds of Plague. How this got an 8/10 may be deceiving considering what was just mentioned, but The Conscious Sedation manages to work around what should be inherent flaws, turning them into strengths and into a strong album. Go figure.

Good cop vs. bad cop vocals rule the day here, with Milman doing battle with Aborted throat Sven de Caluwe. Nary a song doesn’t have some type of vocal trade-off and while it becomes predictable from the onset (read: Milman handles all choruses), System Divide manage to pull a few nice ones out of their assess, most notably “Lethargy” and “(N)ether.” Milman doesn’t have an outstanding voice, but when mashed up against the band’s down-tuned and very aggro riffage, the results are usually worth more than a few listens.

Had Milman not been involved, this would run more like a typical deathcore album, with the band throwing a cavalcade of simplistic, but occasionally brutal riffs against the wall, just looking to see what sticks. Indeed there are a handful of songs there that traverse well into “broo-tal” territory, just reference the break-neck “Echoes” and “Purity in Imperfection.”

Gotta love how Metal Blade is pushing this as new and innovative, even though it’s really not. The band just tossed in a very good female vocalist into the fray and popped out a relative punishing album. If the goal was to flatten the likes of In This Moment, Otep, and other female-fronted acts, then mission accomplished. If they’re trying to pass this off as anything but deathcore with a female singer, then mission failed. It really doesn’t matter – this is good stuff.