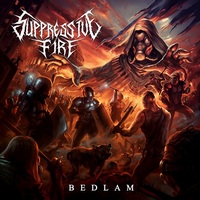 Already receiving kudos from members of the recently praised Final Sign on this very site who also reside in the same North Carolina area, Suppressive Fire are a thrash trio that mince no words or lack the proper fury and intensity to have even casual observers sit up and take notice. Let’s face it – the world doesn’t need another band raiding the Bay Area catalog and reassembling favorite riffs to pass off as their own material, so reasonable confidence goes in when pressing play that we are getting more of an underground sound here. Together since 2013, the band have released a demo and split release prior to this debut 11 song album Bedlam, and 45 minutes later your world may not be the same.

Foregoing any prolonged instrumental set up intro, “Ceasefire” launches the group into a rawer, militant sonic barrage that reflects a love for more European bands like Sodom and Cyclone. Guitarist Joseph Bursey unleashes an axe attack that contains buzz saw picking, occasional brooding in chord choices, and yet sincerely honed in for down to earth, chest rattling intensity. Sure the lead breaks can be very much in the speedy Slayer vein with little regard for melodic enhancement, but when you have such bold hooks for “Thy Flesh Consumed” (Celtic Frost would be proud of the up and down mid-tempo veneer) or the relentless “Holy Masochism”, all is forgiven.

Bassist Aaron Schmidt also handles the vocal airspace, riding along in his gritty sneer similar to what you’d expect from Tom ‘Angelripper’ from Sodom – a probable separator for Suppressive Fire in addition to the occasional death snare blasts of Brandon Smith to a lot of the cleaner, more refined thrash acts. And who can complain about the war/military lyric slant through “Nazi Face Melter” or “Ironsights” – the latter documenting the killing spree of World War II Finnish sniper Simo Häyhä.

Bedlam gets to the heart of thrash with occasional raw death/black influences – channeling anger into a volatile yet consumable final product that will provide a boatload of entertainment value… and get some hair flailing and blood boiling in the pits. Smell the napalm and watch for brutal destruction. 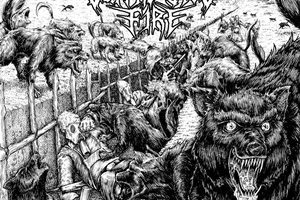