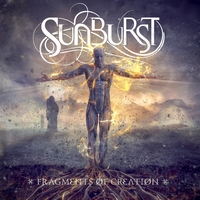 If there’s one band that much of the metal community has to miss, it’s Nevermore. That dark, twisted, and downright heavy approach to power/progressive that they had was unmistakable. Many bands have tried to capture that same magic, with little/no success. Sunburst isn’t trying to ape that same feeling, but it’s pleasant to hear some of those similar tonalities present in their debut, Fragments of Creation.

Featuring guitarist Gus Drax (Black Fate, ex-Biomechanical) and vocalist Vasilis Georgiou (Black Fate), Fragments of Creation has some pedigree behind it. This is progressive metal that tends to stick at the more aggressive and dark end of the spectrum, as “Out of the World” quickly shows. There’s a bit of that Nevermore-esque crunch to the guitars that adds a bit of power to the recording. The riffing borders on thrashy, and you’re bound to be hooked by the time the first chorus hits. Georgiou’s vocal presence shines through as well, being able to shift from the darker melodic vocals in the verse to some decidedly soaring ones that fire off with the chorus. Vocals come front and center with the melodic “Lullaby,” which thankfully avoids the cheese-factor and comes off as a near-selling point. The instrumental “Beyond the Darkest Sun” shifts ears totally back towards the musicianship, and the leads have a pleasant Arch Enemy-esque approach and keeps the 5-minute track full of captivating leadwork. Some other highlights include the upbeat chorus of “Forevermore” and the dynamic-filled 13-minute closer “Remedy of my Heart,” a song that even pulls in some deathly roars.

While Sunburst play by the rules, there’s no denying the songwriting skill and sheer enjoyment factor that Fragments of Creation provides. A powerful blend of the best that bands like Nevermore, Kamelot, and Dream Theater have to offer – plenty of deserved buzz should be coming in Sunburst’s direction shortly.