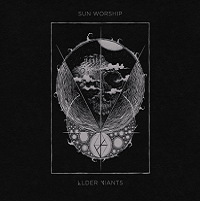 Originally released in early 2014 on cassette (no less), Sun Worship’s debut effort Elder Giants is getting the proper release treatment via Translation Loss. A German black metal trio who formed in 2010, the band thus far, only has a collection of demos, EPs, and splits to their name, channeling the very-obvious spirit of American black metal. In fact, there’s nothing that would allude that these gents are from Germany; their sound is incredibly Americanized, which works in spots, while others…well, get out your Cascadian black metal handbook. Sun Worship follows it to the letter.

Four long songs here (of course), each of which pummel and bear down upon the woods-y, quasi-Scandinavian riff approach that the likes of Wolves in the Throne Room, early Krallice, and Ash Borer have come to cement. Derivative, sure, but it’s hard to mess with the fiery riff tangents that emerge during the first moments of “The Absolute is Becoming,” a number that rapidly becomes Elder Giants’ best, as evidenced by the hyper speed-picking, and back-of-the-song snare action that holds down the tempo. The title track follows in a similar manner, almost beckoning for some kind of atmospheric break, but alas, it never quite comes.

And that appears to be the main issue with Elder Giants and Sun Worship as a whole: They’ve yet to accommodate any sort of dynamic interplay into their compositions. The blast-o-rama and scathing guitar action can certainly float for long stretches, but the bands Sun Worship so pattern themselves after usually leave room for some kind of gentle, ebb-and-flow action that would level off the sonic barrage. But still, Elder Giants is a very “to the vest” black metal album, deceiving in that these guys are German, yet it touches all the corners for USBM.