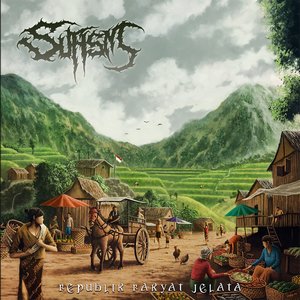 Serving up some more brutal Indonesia death metal, the latest from Brutal Mind doesn’t exactly look the part when you glance at its brighter artwork. In fact the brutal logo stands out as a stark contrast to the more peaceful looking village. But it does align well with the band’s message about their lyrical content, which addresses their home land Indonesia as well as its culture.

The album doesn’t give that traditional ‘beat you over the head’ with brutality that you’d expect either. Instead, you are treated to sounds that accompany the cover art, with sounds of water, animals, and flute feel like waking up on a farm. But it jumps directly from that peaceful visage into your more traditional brutal death metal approach that many strived for in the ‘90s. It’s over-the-top brutal, but not to the point of silliness. They don’t overreach, instead providing a pinpoint bludgeoning that prioritizes some frantic moments of speed and churning slowdowns that dole out equally punishing grooves. It’s a tried and true formula that has continued to work for many a band, but the occasional bits of atmosphere creep their way back in on occasion (“Duruwiksa,” “Darkness is Your Candle”) to shake things up, even if only for a few moments. They really do capture the fury of that ‘90s brutal death metal scene, and the guitar/bass tone is rumbling. The bottom end gives them plenty of weight to toss around in the slower grooves and breakdowns to get heads moving (“Rogahala”), and the restless blastbeats make for some high-octane energy when the band speeds up.

No point in complaining about much when Sufism takes the traditional methods of brutal death metal and still has the courtesy to fling in a few bits of atmosphere to the mix. Don’t be too thrown off by the cover art, this one is a real brutal riff-monster.