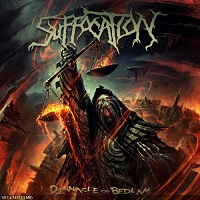 Still a very much relevant entity on the death metal front, Suffocation presently characterize “old man” death metal about as anyone. Since their 2004 reformation, the New Yorkers have put together an impressive string of albums, many of which bear the mark of a band with full understanding of dynamics and technicality. It’s the formula that made Effigy of the Forgotten such a dynamite smash in the early 90’s, and it’s the same thing that makes Pinnacle of Bedlam fly. That, and Terrence Hobbs’s totally awesome skullet and glasses.

The obvious change is the departure of long-time drummer Mike Smith, who has been replaced by Malevolent Creation skinsman Dave Culross. Smith’s patented blast technique was certainly a vital component of the band’s sound, but the riffs and catchy compositions are still what make the Suffocation vital, as heard on opener “Cycle of Suffering,” where Hobbs and fellow guitarist Guy Marchais get their riffs tangled like a bird in barbed wire. “As Grace Descends” is a rare glance toward thrash, with eye-opening solos, while the more slam-filled numbers like “Eminent Wrath,” “Sullen Days,” and the excellent “My Demise” brim with context, maturity, and of course, Frank Mullen’s deranged, tough-guy death metal belch.

Pinnacle of Bedlam sees Suffocation advance upon many of the sonic truisms their career has thrived upon. The riffs might be advanced and off-center, but the structures are easy to grasp, and convey the sort of old-school thought convention that death metal could use these days. Above all else, it’s brutal. Can’t forget that.