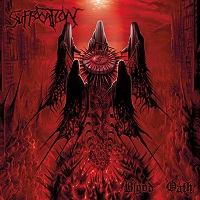 The age-old question: “How do you keep brutal death metal interesting over the course of 10 songs?” is a tricky one. It’s a bit maddening really; you take music so rhythmically pummeling and brutal for over the course of a half-hour and what do you have left? Granted, Suffocation – in their near-illustrious history – been able to answer the above question, just reference Effigy of the Forgotten, but on Blood Oath, it’s unfulfilled. Better yet,unanswered.

It’s not like there are no good ideas to be found – just look at the domineering riff assault of the opening title track or “Dismal Dream” – it’s tough, feral stuff. Classic, too. However, those two are stacked at the front of the album and to be frank, they feel like a composite of the rest the album. In fact, the band probably could have gotten away with a total re-arrangement of the tracklisting and the first two jams would still be the best – that’s just howBlood Oath feels.

Vocalist Frank Mullen is still one of the best in the biz (thanks for staying discernable and credible) and he’s often given the same confines in which to work with throughout the back half of the album. When does let ‘er rip and go for the jugular, like on “Images of Purgatory,” it’s like 1991 all over again. No sweatpants, though.

Come to think of it, there’s not a wealth of straight-up brutal death metal going around at the moment, save for Suffocation and the more obvious suspects like Cannibal Corpse. Death metal is more varied now than it ever was, which should prompt a bunch of veterans like Suffocation to at least try to deviate from the norm. Blood Oath is quality – no joke, but it’s not going to make anyone forget about Evisceration Plague.