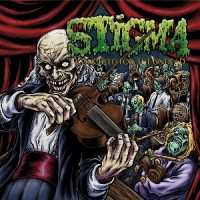 Sounding like a cross between The Black Dahlia Murder and The Absence (two bands that are virtually identical on some level), Italy’s Stigma don’t play the originality card very well on Concerto for the Undead, but they do manage to pull some quality, if not halfway memorable songs out of their collective ass. In reality, it’s hard to guff up melodic death metal, so it’s not like Stigma had a tall order in front of them…well, perhaps they would if they came up with their own riffs. A moot point.

The album crescendos early during “Prove You Are A Man!” a frenzied little melodic ditty with some cool chord runs that help one overlook the metalcore angle of the thing. The pre-requisite technical bursts are tossed in for good measure, allowing the band to round things off nicely once chorus time hit. There are nods to BDM all over this ten-song effort, some more tolerable than others, most notably “…And They Died Happily Ever After,” “The Undertaker” and “A Grave Situation.” Heck, even their songtitles give nods to the Michigan death metallers. Yargh.

To perhaps soften the blow, Stigma has wisely tossed in a horror/shock theme, which gives them some additional weight. Then again, with gruff, indiscernible vocals, it’s quite difficult to make out the words anyway, but hey, it’s a different angle. Beyond that, Concerto for the Undead is more of the familiar, which in certain cases (like this one) is tolerable. Credit these guys for not pissing over the melodic death metal name. One has to hope we’re finally out of that little phase.